Capcom's Take on Star Wars: A lesson in creating derivative works of art

*NOTE: I don't pretend to be any kind of authority on Star Wars whatsoever. I like the franchise. It's not my absolute obsession, so if I'm incorrect about something, please send me a polite correspondence. 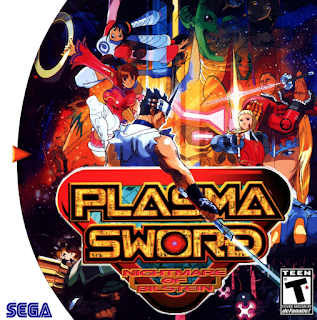 Once upon a time, I owned a Sega Dreamcast. It was my designated fighting game console (N64 for wrestling games, Playstation/PS2 for everything else).

I had them all: Dead or Alive 2, MVC2, Project Justice, Power Stone, Capcom Vs. SNK, The King of Fighters 1998 Dream Match, and this weird game called Plasma Sword.

I learned later on that the game was actually the sequel to a game called Star Gladiator, created by Capcom. The scuttlebutt about the game is that it was supposed to be a Star Wars game. I'm not sure how true that is. Even if it is true, I'm not sure of the context. Was it a deal between Capcom and LucasArts gone bad? Was it supposed to be a "Star Wars" type game, rather than an actual addition to the iconic franchise?

I don't know. And I don't care. The bottom line is that, intentional or not, the similarities between Star Wars and Star Gladiator are undeniable. There aren't many direct parallels, but you can certainly sense the influence the Star Wars franchise had on the creation of the series, which revolves around a space-based struggle between an Earth Federation and a Fourth Empire. Sound familiar?

Capcom's take on Luke Skywalker is Hayato Kanzaki: both lost their parents, both possess a high level of integrity and responsibility for their fellow man, both wield swords composed of energy, and both possess an urge to draw towards the dark side. The villain of the series, Bilstein, also shares similarities with Palpatine in that they both lead their empires against the established order. Bilstein believes in the evil nature of "plasma power" the same way that Palpatine subscribes to dark side of "the force."

Even the concept of "plasma power" is a derivative replacement for "the force" that exists in Star Wars. Plasma Power is a source of energy that only individuals of a certain mental and emotional disposition can use, very much like the force.

So basically the Star Gladiator series is just a cheap knockoff of the Star Wars franchise, right? Well, not quite.

As a college professor, my constant goal in the classroom is to find unique ways to bridge the gap between popular topics and required course terminology. When I talk about the 20 Master Plots, I often try to highlight the fact that many of the stories we've told over time actually use the same plots. We just execute them differently.

For instance, take The Strange Case of Doctor Jekyll and Mr. Hyde, a classic novella about the duality of man and the struggle against his own dark nature. For all of my Marvel heads, we know that The Hulk's character is, at the very least, influenced by Mr. Hyde. But rarely do you hear people say "Hey, Marvel is copying off of that Jekyll and Hyde story I had to read in fifth grade!" That's because we can still respect one story without accusing the other of being a rip off.

In my creative writing classes, and with other beginning writers in general, one of the most insulting things you can say to them is "Wow, I'm reading your story and it sounds a lot like [insert story here]." It's offensive to them because they translate that as "you didn't create this. You just copied off of someone else and changed it a little."

As creators, the natural instinct is to strive for originality. But here's the inescapable truth:

There are no such things as unique stories. Only unique perspectives.

People might take that as harsh or demoralizing. But it should actually be refreshing. Any good story can be traced back to something that you've seen or heard before. The whole point of telling a story is to give the audience an experience that they can relate to. It's why we remake old movies and television shows. It's why people will read Pride, Prejudice, and Zombies. It's why IDW Publishing can build a business around creating comics out of licensed properties from other mediums.

A good story balances originality with familiarity. That's why a Twilight series or Underworld series can resonate with people, without the urge to accuse the creators of ripping off Bram Stoker. That's why the Hunger Games trilogy became the phenomenon that it is, even though Battle Royale covered teen-based, survival-of-the-fittest stories fifteen years earlier. It's not that the story of the Hunger Games is so unique. It's Suzanne Collins' take on this type of story that draws people in.

So I implore all the creators reading this post to not be dismayed if your work sounds like something we've seen before. It's actually an indicator that you're on the right track. When people can look at your work and find it identifiable to something else, it doesn't mean that you've created something unique. It means that you've given your audience an opportunity to see the uniqueness in you.