*To follow up on my post on African American Fighting Game Characters, I will begin spotlighting various tournament fighting game characters of African descent. 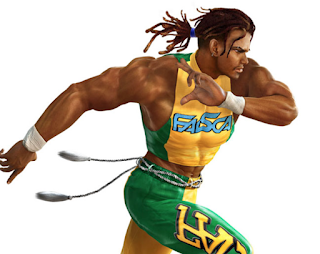 Eddy Gordo - When Tekken 3 dropped in 1997, Eddy Gordo was arguably the most hated playable character in the game. And while nobody said it was because he was black, I've often wondered if he'd would have been so despised if he were lighter. People called him "easy" the same way people called boss characters "cheap." So does the Eddy Gordo hate stem from his easy gameplay or from the fact that a black character shouldn't be that dominant?

Either way, I always thought the Eddy Gordo controversy unfairly overshadowed one of the deepest stories for a black fighting game character. Eddy's father is murdered in a drug war. At the dying request of his father, Eddy takes the blame for the crime and goes to prison, where he meets a master of Capoeria, a definitively black fighting style.

Upon his release, he enters the third Iron Fist tournament so that he could use the influence of the Mishima Zaibatsu to find his father's killers. He's got a very interesting relationship with the other Capoeira character, Christie, which could be perceived as a sibling/student-to-mentor bond. Eddy eventually follows in the footsteps of Bruce Irvin, working for Jin Kazama during his tenure as Mishima Zaibatsu CEO, in order to save his master's life.