Why The Devil Sucks!: Kazuya Mishima and Doctor Faustus 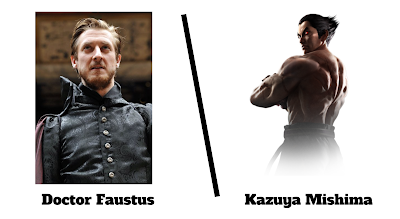 Have you ever wanted something so bad that you'd do anything to get it? Would you sell your soul to Satan?

Let’s make one thing clear. Ambition is not a sin. Every major character in the Bible, including Jesus, had ambition. What determines good or evil are the emotions behind our ambitions. It’s why the Bible says that “selfish ambitions” (not ambition by itself) are one of the acts of the sinful nature (Galatians 5:19-26).

Such is the case with Tekken's Kazuya Mishima and Christopher Marlowe's Doctor Faustus. There are certainly others in the Mishma family that I could have paired with Faustus. I think Kazuya is the best comparison because he’s the only character that, like the good doctor, shares a relationship with a demonic spirit and his story details how that relationship shaped the events thereafter.

First, for all my non-literary readers, let’s get you caught up on who Doctor Faustus is. To start, Marlowe’s story originates from a Germanic folk tale called “Faust.” The story is about a doctor who has learned all there is to know about science and philosophy, but still hungers for more knowledge. So after speaking with some magicians, Faustus learns necromancy and summons a demon named Mephistophilis (Meph), a representative from Hell. Meph helps Faustus strike a deal with Satan. He’ll have the power to do whatever he wants for 24 years in exchange for his soul. I’ll leave you to draw your own allegories for how that story works out. This is the first “deal with the devil” story of the modern age.

Kazuya path to the devil seems different on its surface, but there are actually more similarities than you’d expect when you look at the story’s narrative structure. Kazuya, according to the best official sources that I could find, was a sweet kid born to an abusive father who wanted him to be strong. In the ultimate act of abuse and neglect, Kazuya’s father drops him off a cliff. On his way back up, Kazuya is approach by the devil, who promises to grant him the strength to defeat his father. I think it's safe to say that Kazuya's story might be the first "deal with the devil" story of the fighting game genre. (And to all my hardcore Tekken fans, yes. I am completely ignoring the "Devil Gene." The whole Devil Gene plot device is extremely inconsistent. And until Namco Bandai fixes it, this is the story I'm rolling with because it's the only one that's readily available).

Both stories are unified by the idea of making a deal with a demonic spirit. The motivations for doing so, while different, still originate from negative emotions. For Kazuya, it's revenge. For Faustus, it’s curiosity. Both curiosity and vengeance are things that demand satisfaction, like hunger or thirst. Most often, though, the devil does not allow his victims any true satisfaction. And in the end, the deal always goes bad for the human. In the case of Faustus, dude goes to Hell. And Kazuya’s father, after beating him because the devil distracts him, drops him into an active volcano, which is just about as bad as going to Hell.

The lesson: Don’t enter into any negotiations with the devil or his representatives. You’ll lose.